While you can buy as many pumpkins and hanging skeletons as possible, Halloween lighting allows for more versatility. We can also guarantee that your house will be the talk of the neighbourhood, with the ability to project Halloween inspired lighting on your walls, floors, door or even outside. We’re rounding up the best Halloween lighting tips for the ultimate fright. Read on, if you dare… 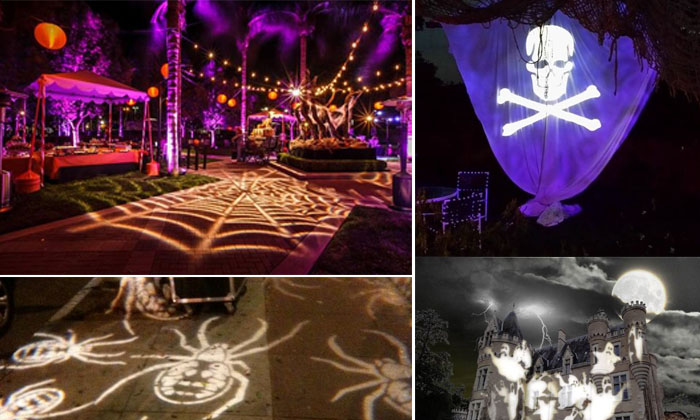 Forget the pumpkins and stringing bats from the ceiling, Halloween gobos are the new kids on the block, as a backdrop to a terrifying night. First things first, what is a gobo? A gobo (GOes Before Optics) is an exciting lighting method for your desired, projected Halloween image. Traditionally a piece of metal, but also available in glass, a gobo produces a spectacular pattern of light. Now you know what is a gobo, if you want scary - you’ve got it.

A spider on Halloween may not sound exciting, but project that same spider on the walls of your house and you’ve got yourself a fright. The huge Arachnophobia gobo plays on all of your worst, creepy crawly fears - particularly at Halloween. This is one of the greatest Halloween projection ideas to display at your party, or even scare anyone who may come knocking…

If you think of Halloween, you think of bats. They’re a staple of all scary events and, rather than hang them from the ceiling; you can project the images on that same ceiling. They can loom large and creepy, overlooking your guests and creating a terrifying effect at your party. If there’s one thing we can promise, your bats will be the star of the show (for all of the most terrifying of reasons).

If you’re displaying spiders across the walls of your venue, you’ve got to have cobwebs. Luckily, these are not the types of cobwebs that stick in your party hair for the rest of the night… We have a range of cobweb gobos available, all varying in design and style. There’s no greater Halloween party lighting effect than a cobweb, taking centre stage.

Dracula is synonymous with Halloween, so why not invite him to your party? The archetypal vampire and party crasher is available in metal, and monochrome glass, gobo form. Project the image of his head on the walls, or ceiling, and watch your guests run in fear when he pops up behind them; it’s all part of the celebrations.

Incorporate the style of The Birds to your party, but without the hunting crows… Our creepy crow gobo is seriously freaky - especially in a dark room, looming over the guests. Let your walls do the talking and set the scene for a terrifying night with The Birds.

There’s no better spooky lighting idea than Frankenstein’s Monster and his blushing Bride, Mrs Frankenstein. All good Halloween parties start with an appearance from the loved-up couple, and you can project their happy faces on any surface at your party. Bonus points if you make anyone jump...

Taking inspiration from the scariest films to hit the big screen, the fright mask gobo is not for the faint-hearted. Use with caution, as projecting this image at your party may cause distress - and catapult your event to fame.

Strike fear into the heart of all your guests with the projected image of a ghost ship appearing over the horizon (your wall). With the moon in the background and the ship sailing for who knows what, your guests will not believe their eyes as they step into your house. This effective and jaw-dropping Halloween lighting indoor idea will transform your party.

If you’re hosting a Halloween party, you have to include a gravestone or two. There’s nothing that screams Halloween lighting, quite like a grave displaying the text RIP. As a backdrop to your photos and activities, the RIP gravestone is a seriously spooky addition.

We can’t discuss our most popular Halloween lighting effects ideas, without mentioning the skellington gobo. The hanging skeleton is no more, with the arrival of the skeleton gobo lighting. No longer will you have to find the perfect place to drape him to scare your guests, but project him on the wall. Your guests will have no idea they’re about to step into his lair…

If you would like to discuss our Halloween lighting tips and gobos for your event, get in touch with one of our team.